Belles hosted Smiths Beez on Thursday 30th March in the Jubilee Room at Albion House, when three quarters of the way through their first leg, the door opened and in walked Chairman, Tony Meadows, accompanied by Charmian Sheppard, Tina Ashfield and Wendy Harris.

Although this caused a stir, nothing was said until the end of the first leg when Tony took to the Alley to pay tribute to Kath Court, from the Belles, who had played for the team for 50+ years. Although the team had changed their name during that time (depending upon which alley they were playing), Kath remained a constant team member, Captain for as long as anyone could remember, and one of their anchor players who could be relied upon to achieve a good score.

Kath was surprised at the visit, which the Belles had arranged and was presented with a glass memento together with a little Certificate acknowledging her reaching this milestone in her skittling career.

Kath is well known in skittle land, and we look forward to catching up with her again during the Front Pin Tournament……………… 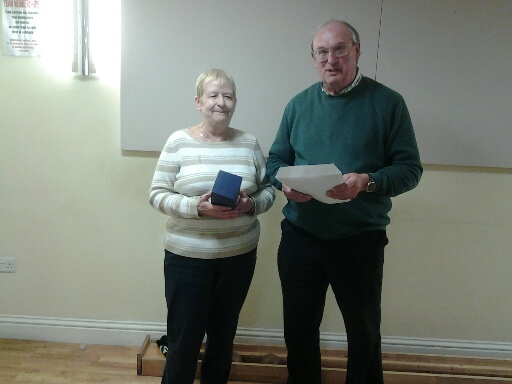 Kath has been Team Captain for as long as anyone can remember.

An Anchor player, reliable for a good score, Kath has rarely missed a game during those 50 years.

Not forgetting she is a great Team Player, encouraging everyone, she is also to be congratulated for her command of the English Language which is apparent at times when her performance has a slight wobble.

Above All, Kath knows that Skittles is a Great Game.