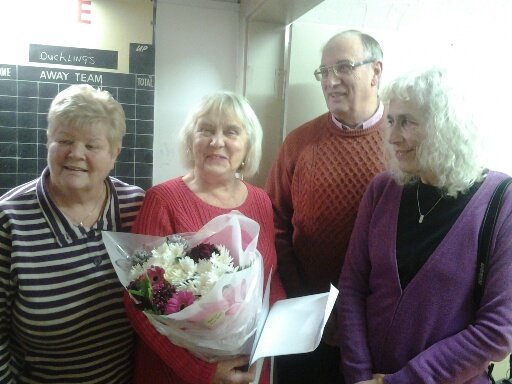 Tony Meadows, (Chairman), Charmian Sheppard (Hon Secretary), Tina Ashfield (Hon Assistant Secretary) and Wendy Harris (Executive Committee Member) took time out to visit The Beehive, Bouncers Lane on Wednesday 9th December, to Congratulate Wheatsheaf Ladies Player - Maureen Claridge, who has been skittling with the team for 60 years. Maureen joined the Wheatsheaf Ladies when she was 19, and soon proved to be a very good skittler, when she won the top of the averages award after her first year. She has held various roles within the team (Captain, Vice-Captain, Chairman, Treasurer) and has proved a constant asset throughout. She is still one of their best players, winning Top of the Averages in 1956, 1973, 1997, and 2013.
Many of you will know Maureen from playing against her and will recall she is one of the main voices saying ‘come on’ encouraging the team throughout. Maureen was presented with a Certificate, and an engraved wine glass by Tony, a bouquet of flowers from her team along with a card, created by Wendy Watson (Team Secretary) which congratulated Maureen on the front page, inside page contained pictures of all of the team, and the back page showed pictures of the pubs they had played at over those 60 years. Lovely mementoes for Mo to treasure.This surprise presentation, happening on the last home match before the Christmas Break, delayed the start of the game against the Ducklings slightly, but an achievement well worth celebrating.

Celebrating 60 years of playing the game

Always supportive of the team, often can be heard saying….come on…

All in All a Great Skittler deserving our Congratulations